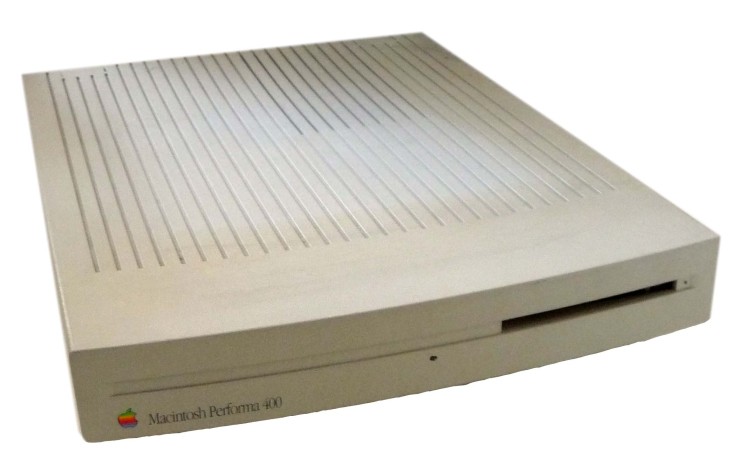 I’m an unabashed Mac head, and have been since my first computer, way back when…

True, I strayed for a while from the path of enlightenment.
I had decided – not quite way back when, but a long time ago, anyway – that I wouldn’t be left behind by the surge that PC’s were making.

I even had a period where I maintained a machine on each platform.
My beloved Mac Performa 400, with a whopping 80MB of memory – for the whole machine – and a blazing 16MHz processor.
And a state of the art Compaq laptop, with a staggering 14.4k dial-up modem, which had to be plugged into the card slot, cause they hadn’t yet figured out how to incorporate it into the body of the computer.
And weighing in at approximately the mass of one of Jupiter’s moons… one of the smaller ones, anyway…

And MS DOS 3, if memory serves.
What a rude awakening that was, coming from the Mac platform.
Of course it wasn’t nearly as advanced as the home machine. so there was some waiting involved, if you wanted to get anything done.

But I had to do it.
I was on the cutting edge; the sharpened, bloody point of a massive revolution, that was going to change the world forever.

Did I know that at the time?
Of course not.
Don’t be silly.

I just didn’t want to be a dinosaur at that point in my life.
Now I’m actually kinda courting dino-dom…

[The video’s not really relevant, except that the piece is called “Afro Blues”, and some might refer to the players as dinosaurs. I thought I’d break up the text a little…]

When Mac released the Powerbook G3, I dumped all other machines, and never looked back.

But I’m not necessarily a follow-the-crowd sheepmeister, where my computer is concerned.
I don’t run out and get the latest and greatest machine, or the newest software, just because it’s been released.
And I certainly don’t have an iWatch… nor will I ever.
My iPod is the classic; because I care about how many songs I can store on it – not what it looks like.

So I’ve been on an OS at least 2 generations old.
Because when half your users rate the upgrade at 5 stars, and half rate it at 1 star (because 0 stars isn’t an option), then I’ll be ding-dang-darned if I’m going to put substandard software on my machine.

That’s the kind of numbers I like to see.
Still, I am on a bit of an older machine.
And I’ve got some ongoing issues with a piece of Microsoft code.

So we’re moving a little slow the last couple of days…
Your patience is appreciated… as will be mine, as soon as it shows up…
Waiting for your patience to arrive can be a very impatient endeavor, at times…

Yes, I did a backup right before the upgrade.
Yes, I can return to where I was, if it becomes necessary…

Don’t you kinda wish you could do that with life sometimes…?